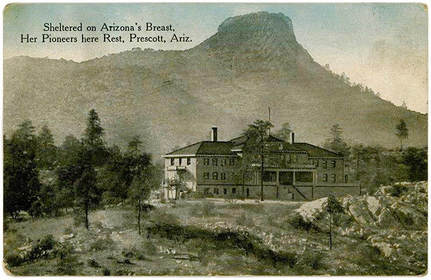 Image courtesy of Tim Gronek
The Story of the Arizona Pioneers Home
By Drew Desmond for the Western Heritage Foundation, Inc.

At the beginning of the 20th century, several aged pioneer miners could no longer work and had no place to live after contributing so much to Arizona’s economy.

Their plight was answered by the first ever, government-instituted retirement home. Even now, the Pioneers Home is one of only two such institutions in the nation.

In 1907 a bill unanimously passed to create the Home, but was left unsigned due to a lack of funds.

The bill was reintroduced the following session. Again it passed without a dissenting vote and on March 11, 1909, Governor Kibbey signed it into law. Still, the bill was conditioned upon the donation of land to build it.

Maj. A.J. Doran became the first superintendent. His foremost duty was overseeing construction of the building which was completed ahead of schedule in January, 1911. Doors opened February 1st.

That first year Buffalo Bill Cody enjoyed one of his “happiest experiences in many years” at the Home reminiscing with several residents he knew.

It was soon realized that women were just as worthy and in need as the men. On April 8, 1916 an addition was opened with capacity for 20 ladies.

After women were admitted, one couple wanted to get married. Since there were no accommodations for couples, the superintendent turned the matter over to the state legislature. After serious debate, they were turned down. Despite this, the couple eloped and after returning from their honeymoon, the superintendent relented and gave them a room together.

For years food was served family-style until Dynamite Joe once turned a bowl of gravy over the head of Six-Shooter Smith in a quarrel over a chicken leg. Thereafter meals were served in individual portions.

In 1926, a hospital wing was constructed increasing the floor space of the facility to 53,564 square feet. At its height 200 guests were housed.

Today a person must be at least 70 and a resident of Arizona for 50 years to be eligible to stay at the Home. Each pays only a percentage of his monthly income.