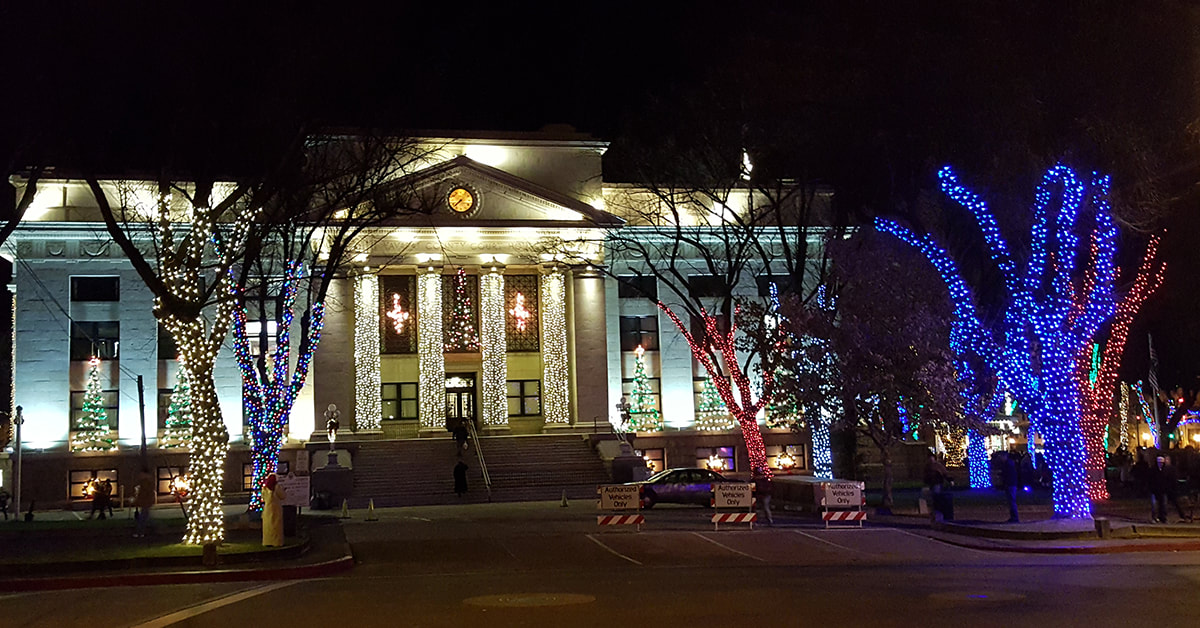 1916 was an auspicious year for Prescott’s Courthouse Plaza. In October construction began on our current courthouse. To celebrate, the idea was raised to erect a Christmas tree in the plaza.

A week before the holiday, a large meeting of city officials and ministers decided unanimously to erect the city’s first Christmas tree.

The Prescott Daily Journal-Miner proudly crowed: “Prescott will be the first city in Arizona to hold a big, municipal, outdoor tree. Everyone is to have a share and for that reason, it will be termed the municipal tree.”

Residents were so excited they actively sought fundraisers to make donations. In a few short hours, the tree fund had grown to $125. A few days later, $400 was reached – more than enough for the project.

Permission was secured from the U.S. Forestry Office to harvest a 30-foot pine, and it was placed in the center of the plaza.

Each branch of the tree was loaded with toys and candy for the kids and beneath, baskets were packed with groceries and other charity items to ensure that no home in Prescott would be without Christmas cheer.

In spite of the short time to prepare, everything was ready for the service on Christmas Eve.

It seemed the Lord himself was pleased, giving Prescott a rare white Christmas that provided a “glimmering frosting” on top of the beautiful scene.

“Mingled with the soft patter of falling snow and the murmur of the wind through the trees, glad voices were lifted upon the air and carried straight to the hearts of the 75 or 100 people who attended the exercises,” the paper related.

Short addresses were given by the men who originated the event.

All the city’s choirs combined to sing “Hark the Herald Angels” and “Silent Night.”

Although the 100 lights on a three-story tree seems paltry to us, people then were wowed by the novelty when they were illuminated.

While the entertainment was presented, Boy Scouts carried basket after basket to the homes of the poor and worthy in Prescott. It took scores of scouts until midnight to distribute all the charity items.

It was one of the very best and proudest Christmases in Prescott history.

“The municipal Christmas tree was such a success that it will probably be repeated again next year when more time and preparation will be given,” the paper said in retrospect.

Indeed, Prescott’s Courthouse Lighting has only grown over the years to include parades, crowds in the thousands, and immensely more than 100 lights!

Perhaps more than any other, it was this hurried idea, Christmas 1916, that would firmly place Prescott on the path to being named “Arizona’s Christmas City.”