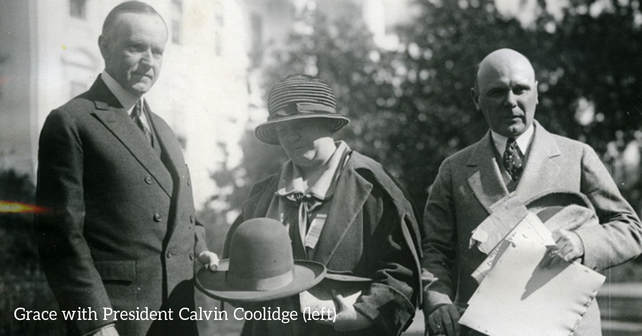 Grace Sparkes was born in Lead, SD, on January 21, 1893. She came with her family to Prescott in 1907 and graduated from St. Joseph's Academy in 1910. Later she received a degree from Lamson Business College in Phoenix.
​
Grace served as secretary of the Prescott / Yavapai Chamber of Commerce, from 1911 until 1945.  She helped organize the Prescott Frontier Days for 30 years. She was known throughout the West as “the girl who bosses 200 bronco busters.” Sparkes helped establish general rodeo rules, many of which are still used by professionals today. She is also credited with coining Prescott's slogan: "Cowboy Capital of the World."

Seeing the need for a first class hotel downtown, Grace spearheaded funding and construction of the Hassayampa Hotel. In 1921, she helped organize the Smoki (pronounced smoke-eye) People of Prescott which promoted Indian lore for over 70 years.

As chairman of the Yavapai Civil Works Administration in 1933-34, Sparkes was instrumental in securing the New Deal funding necessary to construct many buildings and improvements that are still with us today. These include the Lindley Field and Park; the Smoki Museum; and no less than four road bridges in Prescott.

In 1935, Grace and Sharlot Hall, with Yavapai leaders Sam and Viola Jimulla, secured 75 acres of land to create the Prescott Yavapai Indian Reservation. Sparkes also secured money for the Yavapai Indians to build their own houses on the new reservation.

Sparkes  played a crucial role in preserving other historic sites in Arizona including the Coronado National Memorial, the Tuzigoot Indian Ruins, and the Montezuma Castle National Monument.

Sparkes spearheaded the effort to bring us Interstate 10--a faster way to California and an economic boom for the state.

Upon her retirement in 1945, she moved to Cochise County to oversee her own mining claims. She also enjoyed hiking, horseback riding, and reading.

The Old Armory building in Prescott is now named The Grace M. Sparkes Activity Center in her honor, as well as the bridge on Williamson Valley Rd. that crosses over Mint Wash.

Grace Sparkes passed away at age 70 on October 22, 1963 and was buried in the family plot at Mountain View Cemetery, Prescott.

Because of her effective interest in public welfare and her estimable personal qualities, she had an extensive number of acquaintances and was highly esteemed by all who knew her.

She was inducted into the Arizona Women's Hall of Fame in 1985.