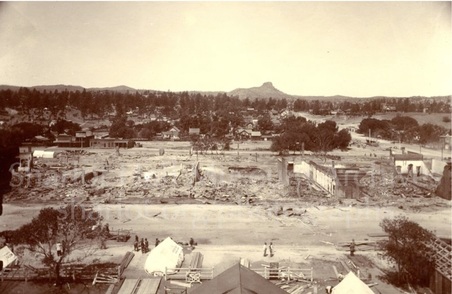 Montezuma Street from atop the old courthouse. After the July 14, 1900, fire, merchants moved their businesses across the street onto the Courthouse Plaza until they could move back.
​On July 14, 1900, fire swept through downtown Prescott with uncontrollable fury, destroying the business district of the small mining town.

Starting in the O.K. Lodging House, next door to the south of the newly built Scopel Hotel on South Montezuma at Goodwin, possibly when a miner left a lighted candle stuck in the wall of his room, the fire quickly spread to the Scopel. At this point the fire could have been easily stopped with a few buckets of water…but Prescott had no water!

The water supply at that time was from a well on Aubrey Street, about a block south, but the pumping plant was being overhauled and repaired, with the engine disconnected from the pump.

Across Goodwin Street, the owners felt that there was no possibility the fire could cross the fifty feet of Goodwin and hit them, but it did. It quickly swept up "Whiskey Row", destroying the new, spacious, Sam Hill Hardware Store,, Cob Web Hall, and the Palace Saloon, finally reaching the newly built Burke Hotel (on the site the present St. Michael's Hotel).

Here there was hope that the fire could end. Built where the famous Diana Hotel was destroyed in the fire of 1883, the Burke advertised itself as "the only fire-proof hotel in Arizona." But the Burke rapidly went down in flames that then moved across the street to burn and destroy all of Gurley St. before moving to Cortez St. Most of North Cortez went down, but the Southern Pacific Railroad Depot was saved.

Back on Montezuma, even before the flames had died down, a lively business had started across the street on the Plaza. "Whiskey Row" had eleven saloons or liquor dispensers, and if nothing else was saved, as much liquor as possible was moved across the street.

The amount of fire loss was only an estimate…possibly one and a half million dollars. Very few property owners had insurance, because Prescott had had too many fires and the rates were almost prohibitive.

Rebuilding started almost immediately, all with brick or stone…no more wood! Many were beautifully rebuilt, such as the Palace Saloon, called, after its completion in 1901, "the most beautiful saloon in all of Arizona", as many feel it still is today.

Despite its four-hour rampage of destruction, the "Great Fire of 1900" can almost be considered a 'friendly' fire. No one died or was badly burned, and Prescott emerged a more beautiful city.