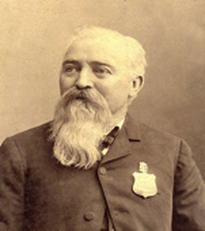 ➢    James Dodson served as deputy sheriff, chief of police or city marshal, constable, tax collector and even dog catcher from at least 1877-1890, and again in 1892.

➢    Dodson’s tenure as lawman corresponded with a period of growth and prosperity for Prescott.

➢    James Dodson was the great-grandson of Daniel Boone. He was born and raised in Clay County, Missouri, and was childhood friends with Frank and Jesse James. With Frank (and later Jesse), Dodson joined and fought with Quantrill’s Raiders during the Civil War along the Kansas/Missouri border.

➢    While enforcing law in Prescott, Dodson used a Colt .45 initially given to his sister by Jesse James. He also carried a pearl-handled Bowie knife. However, he made many arrests using only his fists.

➢    Some historians believe Dodson had six notches on his .45 pistol. Three can be accounted for while he enforced law in Prescott. Dodson himself could not recall if it was three or four.

➢    James died in Phoenix in 1907. The Phoenix Republican wrote, “He was one of those strenuous and daring creations of frontier life whose deeds romancing writers are wont to surround with mountain ranges of fiction.”