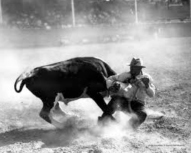 ​The first formalized "rodeo" was held in Prescott, Arizona Territory, during the 4th of July celebration in 1888, and has been a yearly event ever since. That first rodeo was called a "cowboy tournament", and was held in an area off Iron Springs Rd, near where Watter's Nursery stands today.

From 1888 to 1924, the annual event was called by a number of other names, such as Fiesta, Cowboy Contests, Stampedes, etc. The word "rodeo" was first used in Prescott in 1924.

Juan Leivas won the "Best Cowboy" Award at Prescott's first rodeo in 1888. This trophy can be seen at Sharlot Hall Museum.

Tom Mix participated in the rodeo from 1909 – 1913, when he won 1st prize for steer riding and bulldogging.